Your support today is more important than ever because of various factors. One such factor is the racial wealth gap. The online Journal of Blacks in Higher Education, on Wednesday, August 17, 2016, reported that the Institute for Policy Studies documented the racial wealth gap over the last thirty years as having increased by eighty-four percent for average European American families, which is three times the increase for African American families. They predict that if this trend continues, it will take two hundred and twenty-eight years for the average African American family’s wealth to equal that of the European American family. Another factor is that society has a need for the sober-minded, moderate, critical-thinking students these schools produce. The graduates, many descendants of ex-slaves, are responsible, accountable, dependable individuals with the disciplined moral fortitude for developing and contributing to a shared freedom space for all humankind that in necessary to build a good family and good community life globally.

Recognizing that “all children have a right to an education in a moral environment,” according to Imam W. D. Mohammed, we encourage you to contribute to the Sister Clara Muhammad Education Foundation , which supports the network of schools, providing an excellent education for our diverse Muslim and non-Muslim student population, many of whom would have little to no other opportunity for a quality education.

We thank you in advance for your financial assistance. Please see the form below and support our cause by pledging your donation today. 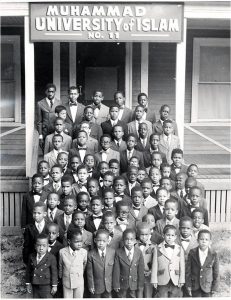 With instant access to breaking news around the world and with the instant ability for one to communicate with others globally, it is imperative that as adults, we continuously seek knowledge and truth while providing guidance and direction for our children as we assist them in their search for knowledge and truth, which will allow them to grow into justly balanced adults. “Education takes our minds from darkness into light,” according to Imam Warithudeen Mohammed [RA], which is imperative at this juncture in the history of humankind because of the various destructive, extremist, ideologies that – with modern technology - one has instant access to, which can impede one’s growth into a justly balanced individual. To that end, from early on, parents and educators must socialize our children to understand whom they are as members of the human family AND what their roles are and will be in contributing to the building of their local and global society as adults.

As an illustration, this has been an uphill battle against a plethora of odds for the African American community for the past five hundred years, when they began to involuntarily migrate as enslaved persons to what became the United States of America. Sixty-five years after slavery was abolished in 1865, the year 1932, which was eighty-four years ago, a group of African Americans in Detroit, Michigan, led by the Honorable Elijah Muhammad, who had begun to hear about Al Islam two years earlier from a man originally from the Indo-Pakistani subcontinent, opened their first school, the University of Islam School [UOI], under the direction of Sister Clara Muhammad. Early on, they began educating their children with an emphasis on assisting them in developing a positive mindset for African Americans during that period of segregation and Jim Crow laws. This first resurrection was a process of re-socialization from the “slave mindset” to that of developing oneself; that is “doing for self,” individually and collectively. They were using certain tenets of Al Islam to develop the necessary discipline for this process of transformation. Joining the community during that first resurrection period, which continued until 1975, were such illustrious personalities as Muhammad Ali, the champion boxer; Malcolm X/El Hajj Malik Shabazz; the future United States Congressman from Indiana, Representative Andre Carson, and the future Putlizer Prize winning New York Times photojournalist, Ozier Muhammad, a grandson of Sister Clara and Mr. Muhammad, who attended the University of Islam School.

As the thinking of Americans, in general, began to become more progressive and to evolve, after the passing of his father, the Honorable Elijah Muhammad in 1975, Imam Warithudeen Mohammed brought members of that community to mainstream Al Islam, which was a second resurrection, and, in the process, changed the name of what was the University of Islam Schools to the Clara Muhammad Schools [CMS], in honor of his mother. These schools have continuously assisted students in developing critical-thinking, sober, positive, moderate mindsets by using a “creation-inspired curriculum” based on the teachings of Imam Warithudeen Mohammed and his instruction to educators. This second resurrection, following the instructions from the Qur’an and the example of Mohammed ibn Abdullah, the Prophet [PBUH], in addition to those mentioned above who are living, includes such luminaries as the United States Congressman from Minnesota, Representative Keith Ellison; Rabbi Abdullah, the former NFL Super Bowl star; the Honorable Judge Anthony Simpkins of Illinois, and the Honorable Judge Fatimah El Amin of Georgia, who is a graduate of the Clara Muhammad School and W.D. Mohammed High School of Atlanta. Although the schools now have diverse student populations, Muslim and non-Muslim, the majority of the students are African American, and because of their history in these United States, the task has been and continues to be arduous. However, we are overcoming all obstacles!

The year 2015 was the one hundred and fiftieth year since the formal ending of enslaving Africans and their offspring, African Americans, in the United States. However, acquiring equal rights - human and civil – has continuously been an ongoing struggle, for the year in which slavery was abolished, the Klu Klux Klan was organized in Tennessee and it has continuously terrorized African Americans and other racial, ethnic and religious groups during these past one hundred and fifty years along with other “hate” organizations that organized later. In fact, since the first African American President Barack Obama ascended to office in 2008, according to the Southern Poverty Law Center in Montgomery, Alabama, terrorizing hate groups have increased by 294%. Another ongoing struggle lies in certain historical traditions the people at one time needed for their survival; however, in contemporary society, these traditions are counter-productive. On January 31, 1865, these newly freed, previously enslaved people were simply thrust out into American society after the most horrific, traumatizing experience that one can suffer, without any kind of grief counseling or assistance in skill building after having had an abnormal socialization process as children. For while enslaved, during the day, young children on a given plantation were cared for by one enslaved woman until they were able to work on the children’s trash gangs according to Mintz (2004). There was little bonding with one’s mother, who was working all day; moreover, fathers had no paternity rights, for enslaved men and women could not even marry! Many fathers did not know their children, nor could children know their fathers. Furthermore, it had been forbidden to teach enslaved African Americans any literacy skills. So, today, education is highly valued, for example, but many parents can assist their children only in limited ways. This is the mindset that had to be re-socialized during the first resurrection for the adults through their programs and for the children in the University of Islam Schools and which, for many, has to be addressed today.

Imam Warithudeen Mohammed, who revived the faith that many of our ancestors brought with them when they were forced to migrate to what became the United States of America, said that “all Muslim children have a right to an Islamic education, and all children have a right to an education in a moral environment.” The creation-inspired curriculum used in the Clara Muhammad Schools is based on the notion that the one Creator of all humankind instructs us through the Qur’an that He has placed observable signs in creation – biological, physical, social, spiritual– which we must study to broaden our knowledge to be able to fulfill His purpose for us as His agent here on earth. The primary focus of the curriculum is the development of the human being. This includes critically thinking about the many destructive forces in society which impede this positive development of the human mindset, including our relationship with each other. For He says in the Qur’an that the variations in our colors and languages are signs for us to know each other, so that we can work together to build a good life - good families, strong friendships, and good communities together - not for some to dominate others in various unjust ways with extremist ideologies, exploitative business practices, antisocial popular cultures, and other destructive practices. Everyone has the potential for human excellence. The Clara Muhammad Schools are striving to assist all children in realizing this potential and striving for to achieve their human excellence!

Help support our cause and donate toay!